SR Appendix-2: Starting and Stopping in the Twins Paradox

This is an eXtra post in the Special Relativity series. It explores a sub-topic in detail that may not be of interest to most readers — either the detail or the sub-topic itself. The purpose of the post is to pre-answer, or serve as a reference for, obvious questions that the technically astute might ask (often questions I once asked).

This article is about the acceleration and deceleration that seems required in the Twins Paradox illustration. Some even refuse to accept the illustration as valid under the belief that changing speed significantly alters the picture.

Here I try to show how we can completely ignore it.

Sometimes when discussing the Twins Paradox in Special Relativity the question comes up: What about the acceleration and deceleration involved when Em stops or turns around? Doesn't that throw it all into a cocked hat? Doesn't that mean what you're saying is all a load of bullocks?

You could just take my word for it and stop reading now.

Skeptic, eh? Okay, fine, no problem; I'm one myself.

There and back again.

The usual answer is that we can always make the trip long enough — and the required acceleration[1] short enough — that any effects can be ignored as being too small to matter.

That's a perfectly valid answer, and it works, so you can stop reading now.

If Em is a robot, she can survive crushing acceleration, so we can not only make the trip long, but make the acceleration extremely brief. Now it comes even closer to being "instantly" moving from one frame to another.

As a robot, Em can be very small and light, which makes extreme acceleration even easier.

But I can see it in your eyes; I thought the same thing. It doesn't matter how small the time of acceleration is, the point is there is acceleration. Doesn't that somehow make a difference?

No. It doesn't. Honestly.

It seems like it might, and there probably is some small difference as Em switches from a motionless frame to a moving one (or vice versa). But while it might change the numbers ever so slightly, it doesn't change what's happening.

We can show this with a situation that doesn't require spaceships changing speed, but it does require imagining something that — so far — is science fiction. It may remain science fiction for all I know, but also may become a reality — there's no physics that says it's impossible.

I'm off to planet Noether!

What we need to imagine is that our minds can live in computers.

These days that doesn't seem like a huge stretch, and many firmly believe it's just a matter of time before we achieve it.

For Em to begin her journey, imagine that her mind is in a computer on Earth. Along comes a passing spaceship, already moving at 0.5 c.

As it passes, Em beams her data-self over to the passing ship. Transmission is arranged such that, once complete, Em's consciousness switches over at a given instant. She instantly changes frames of reference without experiencing acceleration from one to the other.

She transfers her mind down to Noether as the ship passes (without stopping) that planet. She repeats the process to return home by catching a "ride" on a spaceship already passing the other way.

In fact, given the ability to "run" a mind "app" on a computer, there's no reason Em has to switch off her Earth copy after she transfers to the passing ship. After all, she only sends a copy to the ship. The original on Earth can keep on going.

That gives Em the ability to do the Twins Paradox all by herself!

Reader/blogger Mike Smith took acceleration even further out of the picture with a scenario involving multiple parties all staying in their own frames of reference but exchanging messages as they pass. His scenario uses three actors to illustrate essentially the Simultaneous Lightning Strikes scenario (or the Train Too Long one).

We can do the same with the Twins Paradox using four actors. We need one on each planet, and one in each spaceship (outbound and inbound). It's possible with three if the one in the spaceship turns around — which we ignore — and becomes the returning party.

So if Al is on Earth, and Em is on Noether, we can imagine Max come flying past at whatever fraction of light speed. First Max passes Earth, where he and Al exchange timestamps. Then, later, Max passes Noether and does the same with Em.

Max can turn around, or some other passing party — say Liz — can exchange timestamps while passing Em at speed headed for Earth and then, later, fly past Al on Earth.

And what they'll find is that the time dilation works just as advertised in Special Relativity. When this is done with four actors, no one changes speed at all!

So, no. It doesn't matter that there's some acceleration involved.

It can be merely ignored or narrated out of existence. It has nothing to do with what happens.

That Em goes from a moving frame to a not moving frame (or vice versa) has everything to do with what happens! 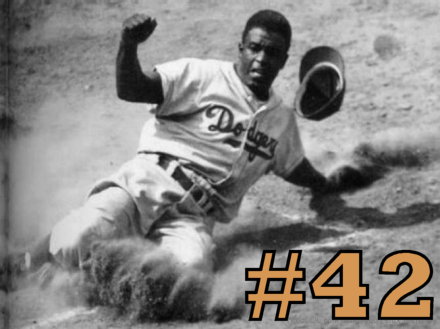 Special Relativity aside, today isn't only tax day in the USA, it's Jackie Robinson Day at the ballparks! Players on teams everywhere wear #42 today in honor of the first black professional Major League baseball player.

[1] This is a technical-y note for technical-ish people. Can I stop saying "acceleration and deceleration" please? Same thing modulo a sign, and I always get tripped up thinking "deccceleration" has more 'c's.